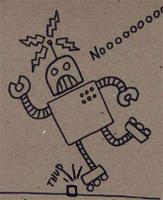 So, I don't just draw robots. I want to make that clear. And I don't want to post artwork that I do for work, just the stuff I do on the side that I think people might like. It's just that I have to draw stuff ALL the time, it's my job--it's what I do. So when I have time to draw something just for fun, robots are one of the things that just pop out of my head. Besides, they are really cool. With that in mind I'm posting another couple robots.

I just got back from camping on a youth conference with a bunch of kids from my neighborhood. We had a blast. We did all kinds of things from service projects to Wrestle Mania. For one of the activities one of the girls taught everybody how to make wooden pens on a lathe. It was cool and they turned out very nice. Well, if you make a wooden pen you should have something to write on so we also made sketchbook/journal things. I was in charge of this little project. Why? I don't know. They were pretty basic. A stack of paper, spiral bound with cardboard covers. I thought they could decorate the covers themselves to make it their own. We used stamps made out of carved potatoes. I made sense at the time. I decided that for my cover, a robot would be just the thing to make it the most coolest cover in the world. Well, it wasn't but it still was kinda cool so, there you have it. I drew the second robot on another cover. I hope I captured the tragedy of the moment.

Maybe my next post will be a cowboy.
Posted by Kactiguy at 5:24 PM 2 comments: