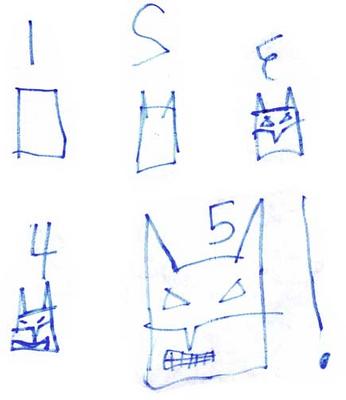 Because of the great response I got from the last tutorial I thought I would post another one. There are many people out there who "think" they can draw batman, but if you want to do it right this is the best how-to available. I admit it wasn't done by me. My son, a true Batman fan, drew this for me when he was 5 years old. I'm sure you will find it helpful.
Posted by Kactiguy at 10:51 AM 6 comments: 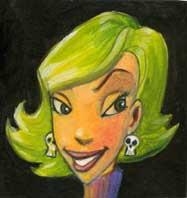 Busted out the oils and did a quick test. This one is small. (2.5x2.5) I really like the feel of the oils. Nice and creamy. My biggest problem with them is the drying time. Most of my deadlines make it hard to go with oils. Oh well. This painting has skeleton earrings so, I thought it would go with the season. What do you think?
Posted by Kactiguy at 9:15 AM 8 comments:

Okay, I've had some people ask how I do these little paintings and so I thought I would include a little demo with this week's IF entry to show the process.

To start off, this isn't the only or normal way I do paintings. This demo shows how I've been doing these little sketch/study/goofing off kind of things that I do mostly for fun. I have a lot of left over scraps of Arches watercolor paper sitting around and so, when I'm bored or tired of working on "real" jobs I pull one out and doodle. They are usually quick and I don't put much planning into it. 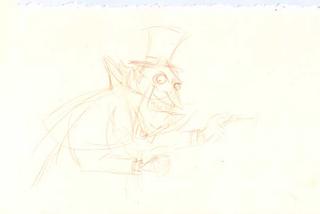 This is the first rough sketch. A bunch of scribbles just to get me started. My first thought was that I wanted to do another Halloween themed thing. Maybe a Dr. Jekyl and Mr. Hyde thing. I threw down some shapes and rough gesture. As it developed I got the idea of him looking over his shoulder holding a creepy key, opening his office door. Whatever. 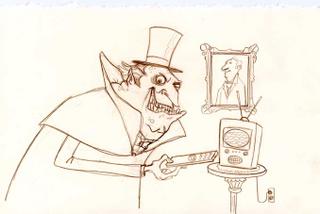 As I started to flesh out the rough sketch I found out that the topic for this week's Illustration Friday was "remote" so I made a few changes as I went. This is what I ended up with. I'm using a brown col-erase pencil. 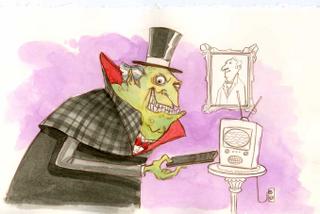 I almost threw this thing out at this point because I thought it was stupid, but then I pulled it back out and started adding some paint. I start out using thinned acrylic paint straight onto the paper. It acts a lot like watercolors. (If this was a real job, I would have scanned and printed the sketch onto the Arches instead of painting on the actual sketch and I would have stretched the paper to eliminate the wrinkles.) I am just dropping in local colors, seeing what works as I go along.

Finally I do the finishing touches. On this one I darkened the blacks, brightened some of the colors, added highlights and little details, darkened the line where it was lost or not defined enough. I kind of move around the painting bringing it up to a level that I think might pass as a "finished" painting. Then I look at the clock and figure I better get back to work. 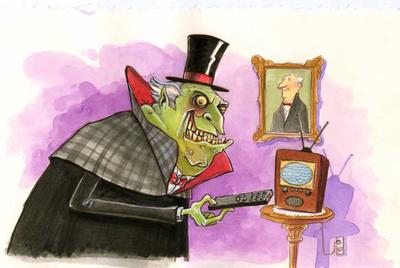 That's it. I hope this has been educational and fun, or at least not lame.
Posted by Kactiguy at 10:37 PM 39 comments: 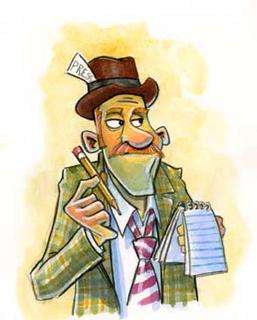 This is just a random little painting done on a scrap piece of paper. I just started drawing and this is what came out. Used some acrylics to add some color.
Posted by Kactiguy at 12:23 PM 6 comments:

It was a toss-up for me this week. I had two sketches I liked. I think Satan won out. I started adding some color to it in Photoshop. Maybe if I have more time I'll finish it up in paint. Unless you think I should go with the robot? 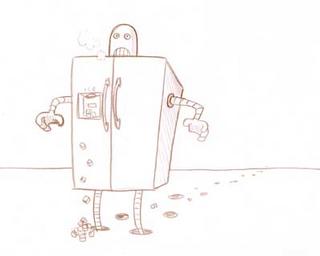 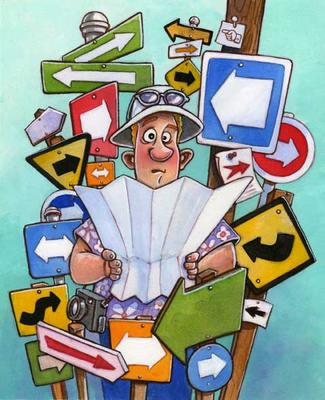 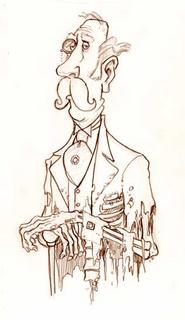 I have been thinking that I need a big classic portrait of some old chap to hang in my Gallery O Terror. One of those creepy paintings with the eyeballs that follow you around. Well I don't know about you but, when an idea like that creeps into my mushy brain it will just fester there until I do something about it. This is a small sketch of the idea. I think I'll paint it real quick to see if it has any promise. Maybe someday it will turn into a giant oil painting with a thick, gawdy frame and some kind of device that makes the eyes move and creeps out my mom whenever she visits...Hmmmmm. I'll keep you posted.
Posted by Kactiguy at 2:29 PM 7 comments: 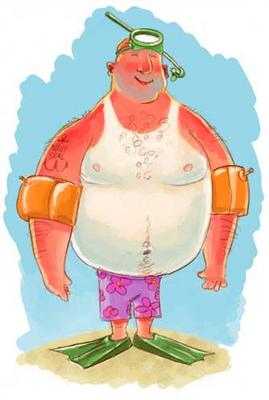