This started as a little thumbnail sketch that I thought was funny. I'm not too crazy about it now. I think it lost something along the way, but it is all I have time for today. I think we've all seen our wives at one time or another fighting to get those blasted things on, only to discover there's a run. May all of your nylons be "run" free.
Posted by Kactiguy at 9:16 PM 27 comments: 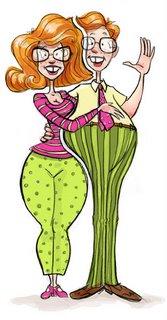 Awww, a perfect match. Although, vertical stripes next to horizontal stripes is a big no-no. This was a very quick sketch with color slapped on in photoshop.

And on another note, today is my anniversary. Fifteen years ago I met my perfect match. Lorien, you're the best! I love you.
Posted by Kactiguy at 8:30 AM 28 comments: 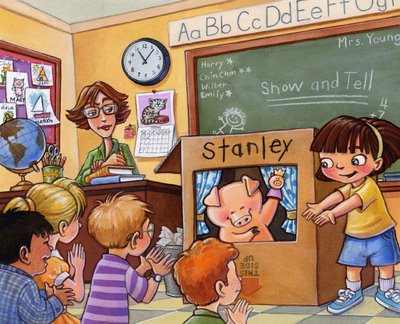 From my book "Mary had a Little Ham". Stanley Snoutowski, the actor, presenting a play to Mary's class. What a pig! I know I did this a long time ago, but it seemed to fit. The whole book is about how Stanley the pig wants to make it on Broadway. Here he is in Hamlet, his first big part in a play.

And while we are at it, here are a few more plays with Stanley in the starring role. Enjoy. 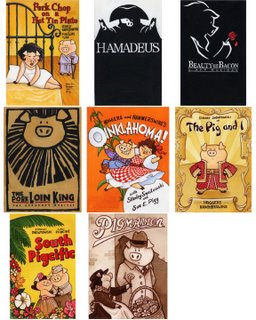 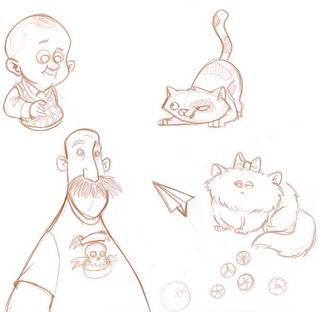 It's been a while. We recently had a lightning strike in out neighborhood that kind of threw off my groove. It knocked out our power, phones, internet, blew out our sprinkler system, water softener, thermostat, and my stereo. The power was only out for twelve hours, but the phone and internet I didn't get back until days later. A major bummer. That, and the fact that I've been really busy has kept me from posting for a while, but I think I'm back up and running.

These sketches are a bit blah, but a least it's something. I figured I better change my "Morning Sketches" to my "Warm-up Sketches" because of the fact that these can happen at any ole' time, not just the morning. These particular doodles just happened to happen during church... which is in the morning, but that is beside the point. The big guy with the stache is a memory drawing of big dude my wife and I spotted on the way to the movies. He was about 7 feet tall, bald and he had this big black honkin' moustache. My sketch might not show the true size of it. It was huge! And it was fluffy not hairy. It looked like he was snorting a muppet. You just have to draw people like that. I drew the baby because he looked like a little old man and I drew the cats because I'm workin on a book idea with cats. That's it. I'll try to do better in the future.
Posted by Kactiguy at 12:04 PM 5 comments: