Halloween is over. One of the best holidays of the year. I thought I would show you the family costumes. My wife, Lorien, really makes some great costumes. None of those bought-from-Walmart kind of costumes for her. 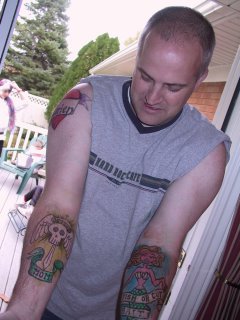 So, here goes. To start off I'll show you what I did. I didn't get a lot done as far as work goes but that doesn't mean I didn't draw anything. While I was trying to get motivated for work I drew some tattoos. I think I was bored. My wife did the one on my shoulder (it's a heart with her name on it) and I did the other two. I'm left handed so I had to draw the mermaid with my right hand. Not great, but it was something to do. I doesn't have anything to do with the costume I was planning on wearing. I'll get to that later.

Every year my mom has a "Skeleton Soup" party for all of her grandkids. (she has 35) It is always fun and there is good spooky food too. I mentioned to my brothers what I thought would be funny to do for a costume and, before I knew it , I was getting a new haircut. 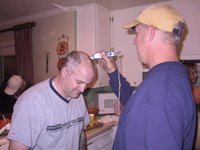 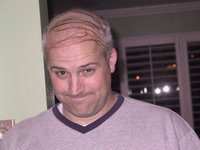 With some elmers glue and a few strands of hair from my mullett wig (it went nicely with the tattoos) I now had a new killer comb-over. I'm sure I was the envy of the neighborhood. I look like some kind of middle aged biker accountant. Still not my real costume but, it was funny.

The pictures of the costume didn't turn out too great. It was dark and so was I. So, to set this up, I need to show you last year's costume. My wife and I made this Dark Rider costume. I turned out pretty cool. The best part was that I wore stilts underneath the robes. I was over seven feet tall. I just roamed around walking up to unsuspecting trick-or-treaters. It kinda freaked out the neighborhood kids. Made one mom scream in terror. (that's my wife the ghost) 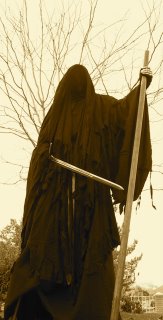 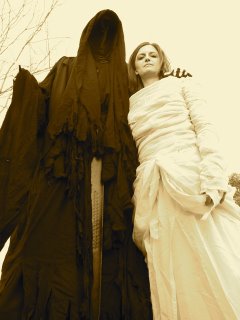 So, this year we took it a step further. My brother went and got this BIG black horse and we rode it around with the costume on. He is almost as big as the horse (He is the one with the beard). An intimidating pair. I took my turn after him. It was great fun. It made for another great halloween. 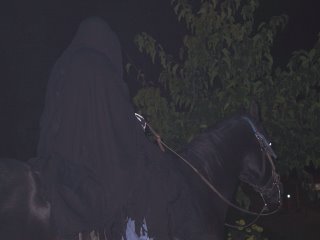 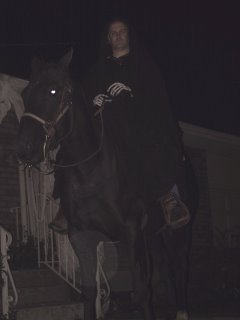 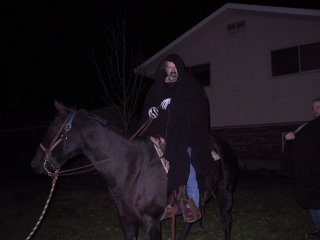 Here are my kiddos. They look great too. Now we have to wait for next year. Hmmm... what should we do? We'd better get started. 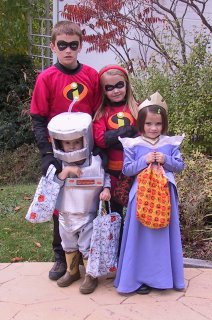 Wow, great costumes! The combover is the best. :-)

Love the Dark Rider costume. It would definitely be spooky seeing that walking around.

My wife is a historical costumer so I totally get it. She loudly proclaimed "the idea of buying a packaged costume offends me" at one of those horrible Halloween supershops a few weeks ago. All the outfits look really great. Your son's robot costume gets major points from me!

Soooo awesome! I was not disappointed, except for one teeny tiny thing.

The kids looked great...and Lorien always looks great. But I did not get to see the Dark Rider. I'm especially sad to have missed the horse. I even went and roamed the neighborhood in hopes that Dark Rider soon would be there. No such luck for me.

But thanks for posting photos so I know what I missed.

You have a wonderfully talented and fine looking family :) I am envious - we don't celebrate Halloween in my country :( Thanks for the entertainment!

wow those sepia phots look amazing.
Thats great you had a horse, that must have given the kids a thrill.
and a very lovely family you have as well sir.
the black rider is cool but that comb over is a real shocker
great pictures!

I, too, missed the dark rider. But then, since I live on the fringes of the ward, no one ever thinks to come down OUR street. (ahem) Not that I'm bitter or anything. Great costumes.